He couldn’t help it. He wasn’t paranoid, he knew that. There were people keeping an eye on him, looking out for every mood. He wasn’t sure that they were totally benign, but he was fairly certain that they meant him some kind of harm. They were never fully in his line of site. He occasionally caught them in his peripheral vision, that slight sense of movement out of the corner of his eye, but when he turned to look, there was never anybody there.

He had racked his brains trying to think of how he might have wronged them, upset, well, upset anyone! If he had, then it would not be something he had done deliberately. He was peaceful, he just wanted to fit in, be like everyone else, going to work, going home, having a good time. So how he had gotten on their nerves, he just did not know.

They had a military feel about them – well, they had to, that’s the only way they could have learnt the level of stealth that they possessed. He was sure they had weapons, which only convinced him further that they meant him some harm. They worked as a team, like a pack of wolves herding their prey. He had to be prepared for some kind of pincer movement. He knew it was coming, but the waiting, the constant wariness, always having his guard up, well, it was tiring. If they were going to do it, he just wished they’d get on with it… 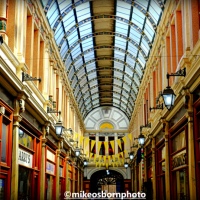